Returning to Camp after 50 years!

Descending the path to the waterfront last June before summer camp had started was the beginning of a wonderful trip down memory lane. Fifty years ago I was the Program Director at Camp DeWolfe and I was delighted when the current Program Director, Emma Tees, offered to give me a tour of today’s camp.

Although much has changed in 50 years, a lot of things were still very familiar: the very long climb up and down “Heart Attack Hill” to the beach, St. Luke’s Chapel with its breath-taking view of the Sound, Benson House (before we knew it was a secret FBI counterintelligence site during World War II), the dining and recreation halls (both of which have been renovated and winterized) and many of the cabins and wash houses (although these too have been rebuilt or updated and winterized). Fifty years ago there was no ropes course or swimming pool, and the Camp was not used year-round, but otherwise it seemed very familiar.

My time at Camp began in 1960 as a member of what was then called the “Work Crew,” a group of 8-10 teenage boys whose primary duties were in the kitchen and the dining hall, peeling potatoes (and otherwise helping prepare and serve food), washing dishes, scrubbing pots and cleaning-up after meals. But as the “Work Crew,” we were also expected to carry equipment up and down the hill to the beach, move tent platforms and do any other work involving heavy lifting or team effort. The entire crew lived together in what is now Matt and Emma Tees’ residence. No other staff dared to visit this bunk house which had more the atmosphere (and aroma) of a locker room than a residence.

After two years on the Work Crew (during which I sweated off a lot of weight), I got “promoted” to the exalted position of Maintenance Director for one summer, repairing bed springs, patching screen windows and doors, unclogging toilets, cutting grass, keeping the soda machine filled with bottles of Coke and doing just about anything else that could be called “maintenance.” My most vivid memory from that summer was learning to drive what I remember to be a 1947, 1.5 ton Ford flatbed truck with something like 15 forward gears, 3 reverse gears, and no power steering.

During the following three summers I helped plan, organize, schedule and lead the full range of program activities, first as Program Assistant, then as Program Director. I remember in particular one notorious activity that happened at least once every summer. Michael Borsari, whose father maintained the grounds at the Cathedral in Garden City, also worked at the Camp. When we “discovered” (every summer) that Mike had “lost” his wooden toe (held in place with a leather strap), we mobilized the entire Camp to search for it. We may even have offered an ice cream reward to the cabin or tent that found it. Of course, some campers were skeptical about Mike’s having a wooden toe to begin with, so after dinner on the night before the great hunt, Mike would take off his shoes and socks in front of the entire camp, revealing that he was indeed missing the small toe on one foot (the result of having gotten too close to his father’s lawn mower at the Cathedral). As I recall, we did in fact have a carved wooden toe that someone found every year. Mike, of course, never actually wore it.

In those days, Benson House was where most of the non-Work Crew and non-counselor staff lived. It was also where staff hung out after hours. It was where I learned to play bridge with my hero, Fr. John and his wife Betty, who was also the Camp Nurse. The front porch (facing the Sound) was where staff were expected to read both Morning and Evening Prayer every day, unless we a good excuse. This was in addition to the Mass that all staff and campers attended in St. Luke’s Chapel before breakfast every morning. Bishop DeWolfe, Fr. John and thus the Camp itself tended to be pretty “high church” liturgically. I think it was every Thursday that we had a Solemn High Mass in honor of the Blessed Virgin Mary with lots of incense, vestments, chanting and processing (we used the sanctus bell every day). Being the thurifer at those services is one of my most cherished memories, so much so that I looked for the thurible at the chapel when I visited last summer but couldn’t find it.

Even though I had been gone for 50 years and some things had changed (and there were no campers around), it still felt like the place that had been such an important part of my young life. I’m very glad that Camp DeWolfe has continued to be that kind of place for so many other young people in the Diocese and that others get to go on retreat there during the rest of the year. 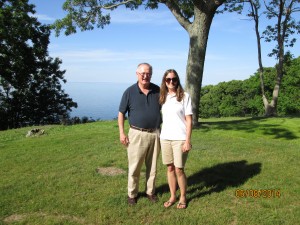 Send in your story today at office@campdewolfe.org