A Journey from across the pond

In February of this year, I began my journey to Camp DeWolfe, a journey that can only be described as the best I have ever embarked upon. Admittedly, I was very nervous coming to camp, so much so that even fellow counselors noticed it at Heathrow Airport. I suppose I was nervous for various reasons, but mainly because I was unsure that summer camp was right for me or even coming to the US was a good move especially when I have a lot on at home such as university. However, I am confident when I say that coming to Camp DeWolfe this summer was the best decision I ever made!!

Immediately when I came to camp I knew it was for me. Living in London is certainly different from being out here! The natural setting looking out to the Long Island Sound is something I’ll never forget and something I hope to return to next summer. The natural setting is something that we are very proud of at Camp DeWolfe and for many of the young campers it is what they talk about at night.

I genuinely am adamant that the work that is done at Camp DeWolfe is brilliant. This was evident from speaking to some of the parents who got in touch with us weeks after their child had gone back home, saying that their child misses camp so much and can’t wait until next summer as well as seeing some campers who have returned 5,6,7 and even 8 summers!!

This camp genuinely makes an impact on the lives of those who come here, whether it is campers or even the staff who are blessed to work in such an environment such as this.
This summer was brilliant. I learned a lot about myself and my calling in life which I am adamant is to work with children!!

Next summer I plan to come back!! 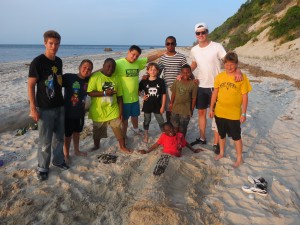