Prior to this trip my only experience of a summer camp was watching The Parent Trap (a million times) as a kid growing up in London so my knowledge of summer camps was minimal. I remember being really anxious about meeting my camp family, as I have no forms of social media, so I had no idea what they looked like, what their interest were or even what they were called. But, it seemed as though God knew exactly how I felt, and thankfully I was able to form a real special bond with all of the people at Camp DeWolfe.

In addition to meeting new people, I was also preparing to learn how to teach rock climbing/ challenge course.  However, as usual, God delivered and I became a good instructor which was due to my professional training and outstanding co-workers at the challenge course, whose help and patience towards me was invaluable during staff training.

In my opinion, the main theme for me for summer has been growing as a person and more importantly as a Christian.  I choose to take a positive stance, for I am extremely grateful for the people I met (young and old), the skills I have learned, the places I have visited and the Christian I have become, because as usual, God delivers. 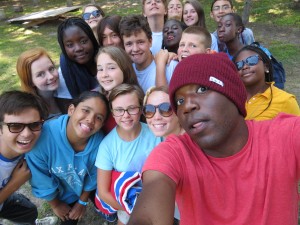 Rene and campers on the course