Several years ago a close friend of mine gathered people together to eat a Passover meal. He came from a Jewish-Italian family and wanted to share this tradition that played a significant part in communicating his religious history. He spent the day carefully selecting and cooking dishes and arranging them on the table in an act of labor and love. When it came time to eat, I remember loving how it involved so many fascists of learning: the strong flavors and aromas, textures, and history and prayers accompanied by tactile objects. It helped me engage in the story of the Israelites being led out of captivity in Egypt in a new way, and let me taste their hard earned freedom through remembering and celebrating alongside those I cared about.

When I came across a biblical story revolving around the Passover for one of my teachings this week, I decided it was the perfect opportunity for the campers to be invited to their very own Passover meal.

I began by telling about the time Jesus accompanied his parents to travel from their hometown in Nazareth to the temple in Jerusalem to celebrate the Passover. After eight days of ceremonies, good food, and reconnecting with family and friends, they set out to return home. But to his parents’ shock, after a full day of traveling, they realized they had forgotten twelve-year-old Jesus! Many hands shot up when I asked if anyone had ever gotten lost in the grocery store (it’s helpful to know even the holy family had the occasional parenting mishap). But upon returning to the temple, Mary and Joseph found Jesus busy going about his Father’s business: sitting among religious teachers, teaching adults who were amazed by his knowledge and understanding.

We often only think of Jesus as a grown-up traveling from town to town performing miracles and speaking to crowds, but Jesus was already actively engaging his call when he was only twelve-years-old. He came from a long line of young people God called and used, including kings, prophets, and pastors like Samuel, Jeremiah, David, and Timothy. In the same way, each of our campers have important things to say and ways God can use them even while they are young.

With this Passover story fresh in their minds, I invited them to break up into groups and have picnics on the chapel floor. We began by saying a prayer over our cups of grape juice to acknowledge God’s provision, “Blessed are you, our God, King of the Universe, who creates the fruit of the vine.” Then dipped celery sticks in bowls of salt water, something that is out of the ordinary and provokes questions. Then we broke our loaves of bread in half, reminding us of how hard the Israelites worked as slaves in Egypt. We ate horseradish and cilantro to taste the bitterness of slavery, which was accompanied by some bitter cries and laments in the group! Then combined it with the bread and (to everyone’s relief) chocolate, creating a consistency like the mortar used to make bricks. The unleavened bread represented how quickly the Israelites left Egypt, not having time to let their bread rise, and the chocolate symbolized the sweetness of their final escape.

This activity had the campers talking well into devotions that evening, some horrified that I had introduced them to such terrible tasting food as horseradish. I sat on the floor of the younger girl’s cabin delighted, looking at their sour moaning faces, realizing in a small way they had tasted the story of God delivering people out of insurmountable hardship into a new life, and knowing these would be the voices who will keep recounting the measures of God’s faithfulness. 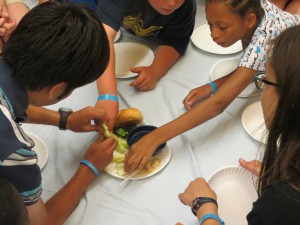