In the Middle of the Storm 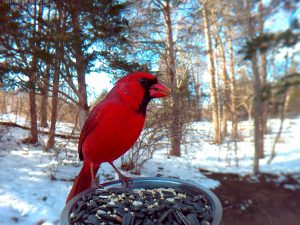 Winter was moving along nicely – or so I thought: The days getting longer and the weather remained relatively mild. Thoughts of spring and of planning my garden and flower beds occupied more of my thoughts. Then, it snowed, and it wasn’t such a bad thing. The storm reminded that our plans aren’t necessarily God’s.

In a brief pause between shovels of snow, I was able to observe God’s handiwork around me. The contour of large evergreens, shrubs, and leftover stalks of spent summer plants forgotten in the rush of transition from fall to winter were transforming and becoming soft.

I watched a lone bird, a starling, sitting on my bird feeder sheltered from the blowing snow. That bird fought hard to remain in that same spot on the ledge of the feeder, alternating between a bite of seed, a bite of suet, and taking a nap.

Other birds came and squawked at him. They tried to get him to move out of the way to get a bite of the suet, but none was very successful and they just moved over to the other side of the feeder and settled for some seed. One large male red bellied woodpecker had had enough. He resolved to dislodge that small starling from its perch, first yelling at the starling, then inching closer trying to make the starling move. But that big woodpecker just couldn’t get that little starling to budge no matter how hard he tried. That stoic little starling with its fluffed, speckled feathers was sheltered from the storm and trusted he would remain safe.

At one time, in one place, during the height of the heavy snow and blowing wind, several birds of different species – chickadees, wrens, cardinals, blue jays, mourning doves, and juncos – all shared the space at the feeder. In the chaos of that storm, God provided a place of shelter, food, drink, and calm for all those birds – even if just for a moment.

Afterward, in the light of near evening, the snow had stopped. In the stillness, the boxwoods and laurels were bent over in half from the weight of the snow. They were bent, but not broken.

Although there were many lessons presented in those brief moments, I was soundly reminded that God works all things for His will, be it anyone in the midst of a personal crisis or the smallest of animals in the middle of a storm. We may bend by the weight of what’s upon us, we won’t break if we let go of our worries and just let God take over.