Love and Laughter at Camp

This summer I decided to venture to America, and be a counselor at Camp DeWolfe. Considering the fact that I didn’t know anyone there, it could have gone either way but fortunately God came through as always. I met some fantastic people whom I now consider to be family as we have grown closer through the weeks.

From the singing in the morning before breakfast to the daily activities ending with evening chapel daily, I got to experience life in a way I hadn’t before. It was interesting to watch the campers as they got to know each other and form new friendships in their cabins and also in their activities. Watching the campers engage in camp games was probably my highlight, the joy and enthusiasm they put towards learning a game and then going on to share their new game with other campers was just simply amazing to see as the campers wanted to spread the love of their new game so that someone else could also find joy in it too.

It was also encouraging to witness the campers inspiring each other to do better and to try new things for example, one of the campers in my cabin was terrified of doing the high ropes however, because she was encouraged by another camper to give it a go, she tried it out and ended up enjoying it. This is just one example of the many times the campers did some encouraging things for each other. I also enjoyed devotions at the end of the day because it gave us a chance to find out how we each experienced the day and it was interesting to see how different each campers day had gone even though they were mostly doing the same things in that day.

Camp was filled with lots of love and laughter and I feel that I have learnt a lot from my experience. Getting to know my co counselors and forming strong bonds with them was another highlight of mine. They were great people to work with and I felt that we encouraged each other and helped each other in times of need as camp did have its challenges, but because we had such a strong support system and friendships, we were able to pull through and continue to form what I would call one of the best summers of my life. 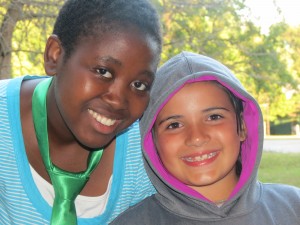 Karen and one of her campers