My interest in going to camp for the summer started off when a friend from home had told me all about their experience which I had looked into further and started considering applying for. While I was away from home on an exchange student programme in Gothenburg, Sweden, I aimed to do my application while I was studying there, in hope that I would be accepted for a place. Five months went by and I was still unable to complete an application and I found myself asking God whether going to camp was the right thing for my summer. Throughout my years in university, I had my eyes set on a career in the legal profession so continued to wonder whether going to camp, rather than gaining more legal experience or securing a training contract at a law firm, was the wisest decision in my first summer as a law graduate.

Arriving back in the UK in January 2014 with an incomplete camp application, I wasn’t fully settled down at home after being away for five months. However, a month later, I decided to attend the final Camp America Recruitment Fair and what happened that day still surprises me. I tried to finish off my camp application earlier that morning so that I would have something to show to camp employers at the fair, although this meant I was a few hours late. I remember sitting on the train to Westminster preparing my heart for a change of plan away from a summer of filling out applications for my career to a summer in the States. Within the last few years, I’ve held onto Jeremiah 29:11 in the Bible where God promises that He has ‘plans to prosper you and not to harm you, but plans to give you hope and a future’. I still hold onto this promise to this day and can confidently say He has never failed me. That day at the recruitment fair proved this yet again as it taught me that God always has the best for me. Even after being one of the last people to get to the fair while other camps were packing up, I showed particular interest in the first stall I saw for Camp DeWolfe, and fifteen minutes later and a rather informal (but awesome) chat with Matt and Emma, I managed to secure a place at a camp where I have come to call a second home with a new found family.

It’s amazing what can happen when you fully learn how to get out of your comfort zone and trust God’s leading because even if all the staff had never met before and come from many different cultures and backgrounds, nine weeks pass by and I now call each and every one of them my Camp DeWolfe family. I admit that I have not been fully active with my personal devotions but God has continued to show himself through the many people I have met, both staff and the kids. Throughout my time here at Camp DeWolfe, I have learned that God has put these amazing individuals down my path for me to learn and grow in many different ways that I wouldn’t have expected for this summer. Being a counsellor at Camp DeWolfe has provided for many memories and learning curves that I will always treasure and the feeling of having a new family who have supported me in countless ways can never be replaced. I will forever be thankful for all the people I have come to know and love over the past few months and for the opportunity to contribute to the success of Camp DeWolfe – a place where families and life changing moments are made. 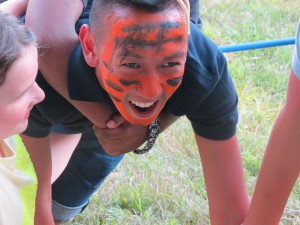