This week, the Youth Group from St Paul’s Episcopal Church in Rhode Island completed the new Ga-Ga court at Camp DeWolfe, ready for summer 2013! They tried and tested the court and played after they completed the project!

Ga-ga is played in a large octagon called the Ga-ga pit. Ga-ga begins with someone throwing the gaga ball up into the air. When it bounces the players say “Ga” each bounce for the first two bounces. Your back should stay on the wall until the three bounces are done. After three bounces the ball is in play and the game starts. Players “hit” the ball at each other in the ring. A player cannot “hit” the ball twice in a row unless it bounces off a wall or another person. When a player is hit, he/she leaves the game. A player who hits or knocks the ball out of the pit is also out. If a player catches the ball in the air, the last person to hit the ball is out.

Ga-Ga is an outdoor game played in the natural setting, that develops community and encourages people to play fair, respectfully and develop skills, while having fun!

Register your campers for summer camp to try this new camp activity! 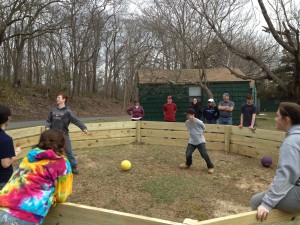 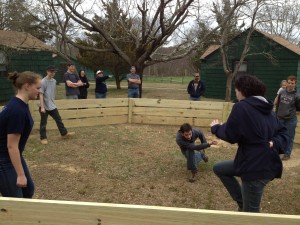