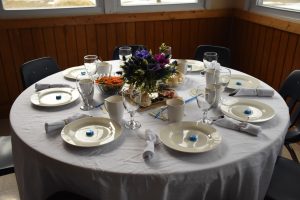 On March 18th, 2017, Camp DeWolfe celebrated 70 years of ministry as a part of the Long Island Diocese of the Episcopal Church. One hundred and twenty-eight (128) supporters, alumni, campers, board members, and Diocese members participated in the celebration. The event was sponsored by the Episcopal Ministries of Long Island and the centerpieces for the tables were provided by Deacon Jason Moskal of St. Mark’s Episcopal Church in Jackson Heights. 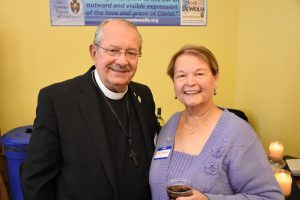 At the 70th Anniversary Benefit Lunch, the Ven. Canon Jerome and Ruth Nedelka were also celebrated as they received the Lifetime Achievement Award. Canon Jerry and Ruth have supported the camp as board members, camper parents and grandparents, and in their jobs and ministry positions throughout the decades. They celebrated their award with three generations of the Nedelka family who have had fun and developed their faith at Camp DeWolfe. 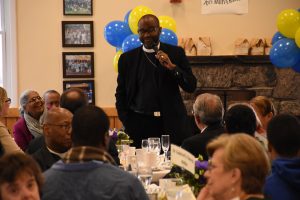 Speeches were made by Board Member, David Asher, Board Vice-President, the Reverend Canon Terrence Lee, and the Bishop of the Diocese of Long Island, the Right Reverend Lawrence Provenzano. Bishop Provenzano reminded those present that the business of the church needs to be spiritual formation and that camping experiences form children in powerful ways. “The formation that happens at camp,” he said, “does not stay here, but prepares children for ministry to their parishes, their schools, and their communities. We in our parishes and homes should look to learn from them about God’s will and God’s community upon their return from camp!”

In total the event was able to raise nearly $23,000 in support of the ministry Camp DeWolfe! Praise the Lord and thanks to all who participated!

Our next 70th Anniversary Event is a celebratory Eucharist service at the Cathedral of the Incarnation on June 3rd. You can get more information and RSVP here.