Seeing God in a Second Summer

Deciding to return to Camp DeWolfe this summer was not a hard decision; the experience I had during summer 2013 was completely amazing and I was at a good position in my life to be able to spend another fulfilling summer as a camp counselor. I was unsure of what it would be like, returning and experiencing camp again with new people, but I was excited to be back; camp in general has always been the place I have felt closest to God in my life, ever since I first went to camp in England when I was fourteen.

I saw God in all aspects of camp this summer – campers being open to new experiences and emotions, overcoming fears at the challenge course, and everyone at camp becoming a family. I also experienced God in our chapel time, one evening especially, when we brought chapel down to the Long Island Sound. The setting was beautiful, just before sunset, and after worship around the campfire (in a circle big and round) we thought about and wrote on a rock something that needed healing, which we then threw into the sea, releasing our burdens to God. It felt very freeing.

This was one of the highlights of my summer and many of my other highs were also spent by the Long Island Sound; I had so much fun going sailing for the first time with two of my campers (even though we capsized and turtled the sailboat!) and spending cabin night doing a beach scavenger hunt with two of the girls cabins was great too. We really are so blessed to have such an incredible setting here at camp and it’s one of the things I will miss most when I am back in the UK.

I believe that coming back to Camp DeWolfe was a choice given to me by God, and I am really glad I decided to return this summer. I learned so much from working with the people I met last year, which I think helped me become a better counselor and leader this year. The people I have met have impacted me in many ways and I know I have a family here at camp which will last a lifetime. 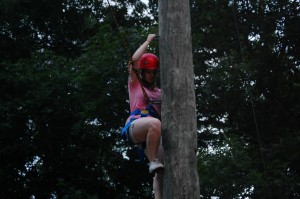