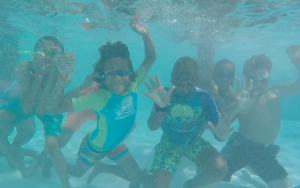 Last week, Explorer Camp of 2017 came to an end. It was quite saddening to see all of our campers go, but we sent them off in joy because God did a new thing in their lives. Without a doubt, campers had tons of fun with their activities. The constant shouts of joy during activities and the Bishop’s Cup (Camp DeWolfe’s “Team Blue vs. Gold” competition) are still ringing in my ears; kids unnaturally scream loud. I heard stories of how campers tried new things and excelled in many of them. Some kayaked for the first time just as others canoed, played music, tried archery, and a plethora of other activities; some even learned how to swim and ride a bike! Campers had a blast, but so did the staff. To lead and care for these campers was both an honor and fun.

But through the activities, the goal was for our Explorer campers to ultimately experience God in nature and how He might do new things in their lives. Like earlier stated, all of us counselors and staff can agree that God did do something new in the lives of our campers. For some, that new thing was a seed of God’s love being planted in their lives. For others, that new thing was a taking another step into discipleship. We told campers how God was going to move and do new things in their lives at camp, but we also emphasized how He would continue to do new things even after they had left. I believe that God is continually reshaping their hearts and will continue to do so in His love and grace.

Parents, relatives, and friends, God has done so many new things in the lives of your children and He still is. Be open to how He is continually shaping them and how He is continually shaping you as well. We as counselors were sad to see them go, but excited at the new things God did and will do. Now, Discovery Camp just started. We have two weeks with these campers and two weeks for God to wonderfully begin His new works in their life at camp and afterwards. Pray that He work through us to also be godly examples and that campers are open to His new works and shaping. God bless.

“being confident of this, that he who began a good work in you will carry it on to completion until the day of Christ Jesus.” (Philippians 1:6)