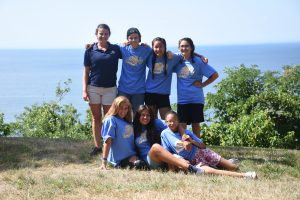 Kayleigh and her Cabin

Back in December, I was agonizing. I had a decision to make – what I was going to do this summer. I go to a competitive university and the pressure to get a fancy job or internship in the city was high. But I felt God calling me to something else – to return to the little camp that God put so much in my heart. I felt like I had unfinished business. I had no idea what it was, but I was willing to trust God.

Now as I look at the suitcases of my final campers of the summer, I understand why I was called back. Growth in a person is a slow change. We often say at camp that we don’t often get to see the fruits of our labor – how our campers grow. Camper who grew in confidence and maturity during camp last summer grew in leaps and bounds during the year. To work with them again as their new selves was incredibly rewarding and fulfilling. It made me very proud of the young adults they’re becoming. To have played even a very tiny role in their growth means the world. This summer has truly taught me the value of investing in a community of young people.