Summer Staff Story: How did I experience God last summer at Camp DeWolfe?

God did some really awesome things at my time spent serving at Camp DeWolfe 2012! I think one of the major aspects from camp that I was able to learn and grow from was that it was a diverse place. Between the staff and campers, Camp DeWolfe brought together different cultures, faith backgrounds etc., and God really taught me so much from that experience. I learned that although people may have different views and ways of life, we all worship the same God and we all share His same unconditional, faithful love. This is a love that is never ending and so strong, and I think Camp DeWolfe had a great environment that exemplified Christ’s love and acceptance.

Through teamwork and trust building, Camp DeWolfe allowed campers and counselors to overcome fears and take steps to do tasks they never would have thought possible. Personally, I worked in the challenge course and one of my favorite aspects of camp was seeing the campers overcome fears as the weeks went on. By the end of each week, I saw shy timid campers transition into courageous, outgoing campers who were determined to reach the goals they set at the beginning of the week. I was so proud of the campers as I saw them meet their goals on the challenge course, as many of them flew up the rock wall by Thursday!

Another great memory at Camp was spending time in the cabin getting to know the campers. As girls, we loved to just talk or play silly games and this bonding allowed long lasting friendships to form. It brought me such joy to see the campers grow closer to each other and to provide a comforting place in the cabin they could be themselves and just enjoy time together. Every night, we would have prayer and devotional time, and I also saw the growth in the campers as they became more interested and more open about their faith. It was awesome to see how campers started to lead prayer in the cabin at night, or became more open to sharing what God did in their day.

Overall, Camp DeWolfe was a great experience and I am so thankful to have had the opportunity to work there. The peaceful environment allowed me to unplug, connect with God, make new friends, and to create an impact on the young, impressionable campers. 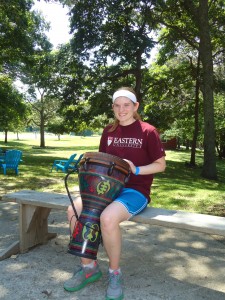